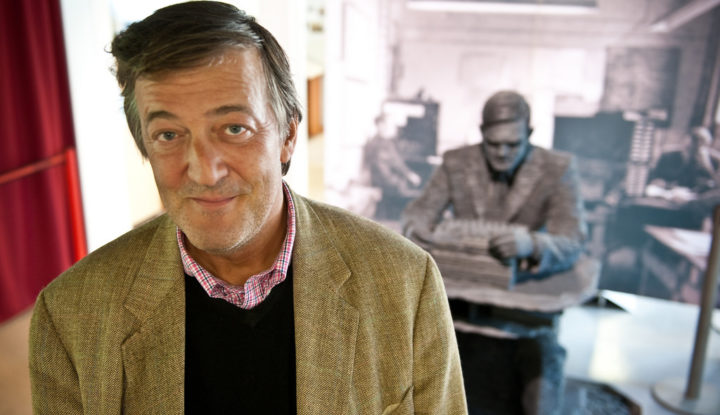 He’s one of Britain’s wittiest men but the fact that humanist Stephen Fry is under investigation by police in the Republic of Ireland for blasphemy is beyond a joke.

Fry’s alleged offence two years ago was to give an eloquent restatement of the classic theological argument known as “the problem of evil”: how can an all-loving God be responsible for a world that includes so much suffering, such as “bone cancer in children”, in his words? As one head of RE at a secondary school here in England tweeted, “I use this clip at GCSE & A Level for prob of evil. If RE teachers in Ireland have are they also ‘guilty’ of blasphemy?”

Debate and discussion over powerful and emotive topics like religion and belief are, by their nature, endlessly provocative. They are also vital, and when so many countries still try to use the force of law to shut down these discussions, we all risk intellectual impoverishment.

Other European countries such as Italy, Austria, Poland and Turkey still have laws that are actively in use. In Greece, in 2014, Philippos Loizos was handed a ten-month suspended prison sentence for mocking up a picture of a Greek Orthodox patriarch, Elder Paisios, as a pasta dish. While in Russia, blasphemy laws were notoriously used to sentence the band Pussy Riot to hard labour after they performed in a Russian Orthodox Cathedral. This year they are also being used to prosecute a humanist blogger who filmed himself playing Pokémon Go in a church.

The most serious uses of blasphemy laws around the world are not in Europe, but in Islamic states, 13 of which punish blasphemy by death. These include Mohamed Cheikh Ould M’kheitir in Mauritania, charged with “insulting the prophet” for an article challenging slavery; humanist Ahmadreza Djalali, who worked as a Professor in Brussels but is now sentenced to death in his native Iran; and Saudi Arabia, which just last week sentenced Ahmad Al Shamri to death for “atheism”, while others such as Raif Badawi also sit on death row.

Then there are the extrajudicial killings that such laws inspire. Humanist activists in Pakistan, India, and the Maldives have all been murdered in recent weeks. A ten-year-old was killed in Pakistan in the last few days due to anti-blasphemy riots, where he wasn’t even the target. And there has been an ongoing spate of humanist bloggers being hacked to death with machetes in Bangladesh, as Islamists work through a “hit list” of 84 names as well as increasingly targeting others.

Islamic states often justify their blasphemy laws by pointing to the existence of those in Europe, calling Europeans hypocrites for advocating for abolition whilst still having their own. Indeed, since 2013, EU foreign policy has been that blasphemy laws should be abolished, in spite of the fact that several member states have their own.

The main international effort to repeal blasphemy laws has been through the End Blasphemy Laws campaign, spearheaded by the International Humanist and Ethical Union and European Humanist Federation, of which the British Humanist Association is a member. Over its two years the campaign has seen successful repeals in Norway, Iceland, Malta and France. The current Irish Government is committed to holding a referendum on doing the same. Now it is surely time to fulfil that promise.

This article was originally published in the Independent: http://www.independent.co.uk/voices/stephen-fry-blasphemy-ireland-getting-worse-around-the-world-a7723631.html