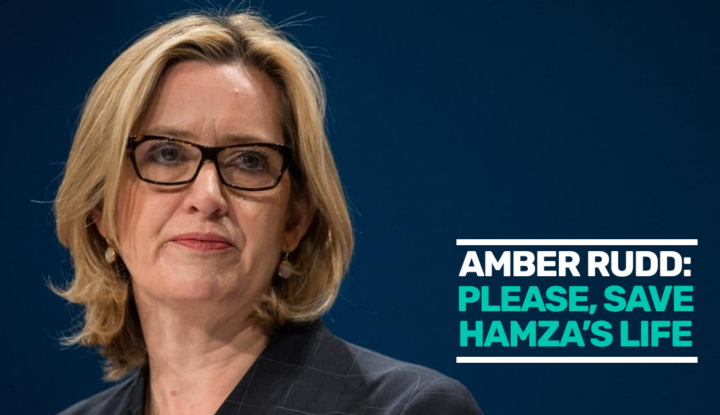 Yesterday my colleagues and I delivered 12,500 signatures to Downing Street urging the Government to overturn their appalling decision to deport humanist, ex-Muslim, and Humanists UK member Hamza bin Walayat.

The Home Office intends to deport Hamza for ‘failing’ a test of his humanism which bizarrely included not being able to recognise Plato or Aristotle among ancient humanist thinkers as well as questions related to the semantics of whether humanism can be considered a religion or not.

Hamza arrived in the UK in 2011 and has since had to to deal with death threats from his own family and community members in his native Pakistan for his humanist beliefs and his rejection of Islam. Pakistan is one of 13 countries where humanists are considered guilty of apostasy, a crime punishable by death.

The line of questioning that Hamza was subjected to was immensely unfair for two reasons. First, it was founded in a entirely misunderstood conception of beliefs in humanism as well as its history — especially given that Plato wasn’t even a humanist. And second, it presupposes that a holder of specific worldview or set of beliefs should be able to recite on command specific elements of its history or ancient adherents. It’s hard to imagine, upon claiming asylum, that a Christian be asked to quote verses of the Bible or to recognise St Thomas Aquinas among Christian thinkers. For many religious believers, the history of their belief system may be of personal interest, but it is a not a means of determining the strength of their convictions. The same goes for humanists, and the Home Officer ought to have known this.

Aside from unfair questioning, the handling of Hamza’s asylum claim reveals something even more worrying about the Home Office’s approach to humanists’ asylum claims, and that’s that they seem deeply confused about the rights of non-religious people fleeing persecution. In coming to their decision, officials wrongly claimed that non-religious people are not afforded the same level of protection under international law as religious people when faced with the real and immediate threat of violence and persecution because of their beliefs.

It has been long established in the Equality Act 2010 that references by authorities to religion must be read as being inclusive of those with non-religious beliefs, and officials crucially failed to recognise this when they wrongly concluded that the UK’s obligation to protect those fleeing violence because of their beliefs does not extend to those with humanist beliefs.

When you consider that there are 30 countries, including Pakistan, assessed by the International Humanist and Ethical Union (IHEU) as exhibiting ‘grave’ violations against the non-religious — such as death and imprisonment for apostasy — then we’re on the cusp of an alarming precedent with wide repercussions for non-religious people seeking refuge from persecution in the UK.

We’ve now arrived at scenario where a man’s life at risk because of completely avoidable misconceptions about humanists. But it’s not too late the rectify the situation.

I’m incredibly grateful for all who have fought to bring this injustice the Government’s attention. It’s now time for a reversal of the decision and for lessons to be learned!