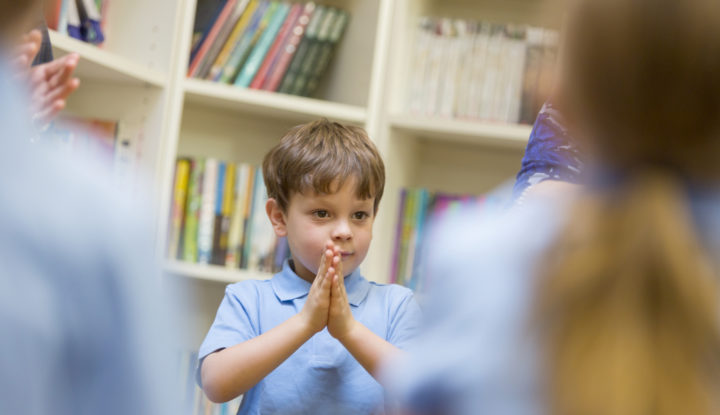 The support of successive governments for faith schools has encouraged religious groups to believe they have total control over children’s education, writes one secular campaigner

Last week the head of a faith school in London wrote a letter to the prime minister, complaining about Ofsted’s “secularist agenda” and accusing Humanists UK of “targeting” the community and of “deliberate disregard for cultural sensitivities”. The letter was prompted by the exposé by my organisation, Humanists UK, of the school found to be redacting textbooks to remove mentions of gay people, examples of women socialising with men – and pictures showing women’s shoulders and legs.

The Jewish parents who brought the redaction of textbooks to our attention and the attention of Ofsted would obviously reject the “cultural sensitivity argument” promoted by their religious leaders. But these parents apart, the debate that these events once again bring to the fore is that of parents’ rights vs children’s rights.

Much is made of the balance between parents’ rights – or the rights of religious communities – and children’s rights, particularly when it comes to faith schools. Striking that balance isn’t always easy. On the one hand, parents have the right, as enshrined in Article 2, Protocol 1 of the European Convention on Human Rights, to ensure that their children’s education conforms “with their own religious and philosophical convictions”.

To suggest that all these rights can or should be subjugated by the rights of parents is wrong – and implies that parents’ rights have no corresponding responsibilities. I don’t think anyone would agree that this should be the case. It would also be wrong, in our view, to suggest that just because parents have rights and responsibilities in relation to their children, they have total possession and entire control over them. Children’s own rights and interests matter and we in the wider community has a duty of care to all children – and at the very least the children in the schools that we fund or regulate.

In the exercise of that duty of care, it is not unreasonable for the government to uphold the rights of children by expecting that certain standards be met. At their most basic level, these standards include complying with equalities legislation, and promoting values of individual liberty, mutual understanding, and tolerance. When packaged up as “British values”, these requirements sometimes attract derision and resistance. But when stated plainly for what they are, it becomes obvious that these are things that every school, state-funded or otherwise, ought to be able to achieve. If a group or school claims it is unable to do this, for whatever reason, then that is rightly a cause for concern and it is only right for the relevant authority to intervene to ensure that children are both safe and receiving their entitlement to a decent education.

The question, to use the current example, is does a school redacting textbooks to remove historical facts and mentions of gay people or to enforce a particular view on the role and freedoms of women meet these basic standards? Surely, for anyone who cares sufficiently about the individual flourishing and wellbeing of all young people, whether they be girls, boys, gay, or straight, the answer is no.

So why the uproar, not just from the religious communities involved, but from some sections of wider society too?

It’s simple. Unfortunately, the support of successive governments for faith schools of all kinds – and for the influence of religion in education more generally – has encouraged religious groups and a minority of religious parents to believe that they personally have total control over children’s education, and never mind the rights of the child. Worse still, they think they have the right to have this education funded by the state and that any state oversight is an overreach.

We have been warning about the consequences of this historic deference to religion for decades. At last Ofsted, local authorities, and the Department for Education are beginning to wake up to them. Last week, in its Integrated Communities Strategy, the government said:

“The government will always protect people’s legitimate rights – for example, to free speech, to hold traditional views and to practise their religion within the law – but we will not shy away from challenging cultures and practices that are harmful to individuals or restrict their rights and hold them back from making the most of the opportunities of living in modern Britain.”

In this, the government is absolutely right. It cannot allow culture, tradition, or religion to be used to deprive any person of their rights – and that includes children. In pursuing this ambition, the government will meet opposition, but it should not be deterred.

This article originally appeared on www.tes.com