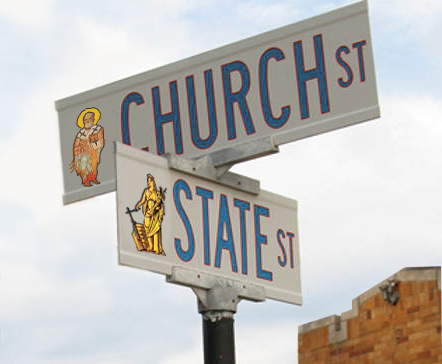 In the run-up to this year’s Conservative Party conference I was delighted to be asked by think tank Bright Blue to contribute to their quarterly magazine, Centre Write, which for this edition paid attention to an important issue in our society today: the relationship between religion and public life. For my article I chose to focus on secularism; what it is, why it’s important, and how it’s the best arrangement to secure fairness, justice, and freedom for all.

You can read my article below and you can read the PDF of the entire edition of Centre Write here.

Secularism, globally, is under threat. Attacked from all sides: from the left, from the right, by liberal multiculturalists and illiberal totalitarians, abused by racists and xenophobes as a stick with which to beat minorities in the West, subverted elsewhere by religious fundamentalists planning its destruction.

But perhaps the biggest enemy of secularism today is ignorance. Although secularism has been of fundamental importance in shaping the modern world, it is not as well-known a concept as capitalism or social welfare or democracy. You won’t find it commonly studied in schools or even at universities. These days, when all the implicit assumptions of modernity and the open society are under strain, this is a dangerous situation. Reasonable debates about secularism on the basis of a shared understanding of it, what it means, and where it came from, are in short supply.

Secularism is the idea that state institutions should be separate from religious ones, that freedom of belief and thought and practice should be an automatic right for all (unless it interferes with the rights of others), and that the state should not discriminate against people on grounds of their religious or nonreligious worldview.

In a hypothetical homogenous society, perhaps there could be a non-secular form of state or government that would be fair, but there is no such thing as a completely homogenous society. All societies are made up of distinctive individuals. In the context of this reality, secularism holds out the best possibility of securing both liberty and fairness in any democracy that respects the rule of law.

Today, secularism is a feature on paper of states from India to the US to France. All the states that have adopted a secular system have done it in their own way, according to the nature of their own particular society and their religious, cultural, and political history. Even so, the arguments made for secularism in almost all times and places have been similar. It is argued that this system is best able to secure freedom, justice and fairness. It is promoted as the best system to avoid sectarian conflict and strengthen peace. It is cast as a pathway to modernity.

Even in societies which are not secular on paper, these assumptions often prevail in practice, with government in liberal democracies relying on a de facto secularism in the conduct of government, which makes no laws on religious arguments alone and expects fair treatment of citizens regardless of their creed.

In terms of its settlement between religion and the state the UK is an unusual case in comparison with other nations. Or, more properly for the purposes of this discussion, England; in both Wales and Northern Ireland the Church has been disestablished, and Scotland always had a different arrangement. On paper, we have one of the most religious states outside of the Islamic word. At the same time, we have one of the least religious societies in the world: less than half our population identify with a religion and less than a third believe in one.

A combination of this second fact as well as the beneficent impact of the liberal political tradition, which slowly secured throughout the nineteenth century liberty in practice for non-Anglican protestants, Jews, Roman Catholics, and humanists and other non-religious people, has rendered establishment softer in practice than the law might suggest. Still, it is not as soft as all that.

We are not a secular state. We remain legally a Christian one. If our head of state, Her Majesty The Queen, were tomorrow to experience a revelation of the truth of the Mormon faith, let us say, abdication would be her only option. Similarly, if her son were to become a Sikh, or any of her descendants a conscientious non-Anglican, unwilling to pretend as previous monarchs may or not have done, that would be the end for them too. This is not a serious problem, perhaps – there is always another potential head of state ready and waiting – but it illustrates the slightly farcical nature in principle of our religious settlement.

So what might the practical focus of any future UK ‘Secular State and Disestablishment Bill’ be? Certainly, it would not mean a banishment of religious people from public life. Secularism is compatible (indeed, enables) religious charities and citizens to live their lives and be active in politics in line with their beliefs. Nor does it need to entail – as it sometimes has in the US or France – the total silence within public institutions on questions of religion and belief. There is a strong case for pluralistic inclusion when it comes to education about religions and non-religious worldviews in state schools, marriage laws and pastoral support in public institutions like prisons and hospitals, and much more, wherever inclusion can be achieved not at the cost of the rights and inclusion of others.

But there are clear things this future bill would target. National occasions and memorials would no longer be presided over by the priests of a denomination most of us aren’t members of, but constructed in a way that represented our whole nation. Clerics would no longer sit and have votes in our parliament by right. We are, in any case, the only state other than Iran that allows this.

Our state schools would no longer be legally required to have daily Christian worship – the only state schools in the developed world that are so required. State-funded schools would no longer be controlled by religious authorities, selecting pupils on religious grounds, causing religious and racial segregation, and impeding social mobility. Again, egregiously, we are almost alone in the OECD in allowing this.

If the law in the UK was changed along these lines, then the result would be a fairer society, that maximises the freedom of religion or belief for all.