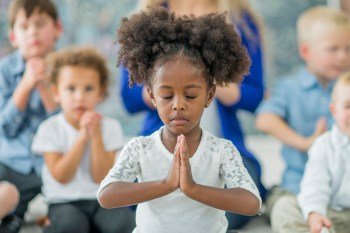 Last week, the new government-funded home learning platform Oak National Academy held the first in a series of online assemblies which included a message from Archbishop of Canterbury, Justin Welby. In addition to assemblies to be presented by a ‘range of well-known faces’, the Church of England has partnered with Oak to provide separate weekly collective worship sessions led by schools.

Here, I discuss how last week’s assembly failed to meet this inclusive goal and explains why the law on collective worship needs to change once schools return after the coronavirus crisis.

It was billed as the ‘biggest ever school assembly’ and it may or may not have been. On my screen at least, live viewing figures started out at around 3,000 but declined as the assembly continued. Although this excludes later views, at its height, the live audience was roughly the equivalent of three large English secondary schools, but that is before we consider that the total number of viewers doubtless included at least a few older Christians keen for the message, online spiritual seekers, Justin Welby fans, and interested observers like me.

If the assembly proved less than popular with parents and teachers, it should not be difficult to see why. The Archbishop of Canterbury worked hard, the sentiments were fine in parts, and certainly some viewers will have been uplifted and heartened by the whole thing. But none of that alters the fact that to many, it will have seemed strange that he should have been there at all. The vast majority of people of parental age in Britain don’t identify as religious, and certainly don’t identify as Christian. The vast majority of children don’t either. In most schools, assemblies are based around shared values like honesty, respect, or cooperation. They build on stories and inspirational examples to encourage personal development, build mutual respect, and give a sense of community that is for everyone. So why was this ‘assembly’ so religious?

The answer is a law in England and Wales that, since 1944 (when it was controversially introduced by the wartime parliament) has required every state school to hold a ‘daily act of collective worship’ of a ‘broadly Christian character’. Perhaps the law made sense in its day, when most parents would probably have identified with Christianity in some way and seen it as a source of morals. But the law is an oddity today. More odd is the tortured attempt to make out that collective worship can be ‘inclusive’ – the claim made by the online Oak Academy which, unlike most schools in real life, held an assembly which was indeed ‘collective worship’.

I’ve attended many school assemblies either to speak at them or to inspect them for the local authority, and seen firsthand how brilliantly many schools work to put on assemblies that are truly inclusive of the whole school, often exploring different beliefs as well as issues of ethical importance but always on a foundation of what can be shared by all. This assembly was by no means an example of this. At many points, it slipped significantly. Children were told hope was all about ‘patience, positivity, and keeping going under pressure’ (so far so universal) but then that, ‘it is God who gives us the strength’. Elsewhere, children from Anglican schools were invited to take part in a short film where hope was defined as ‘a confident expectation of the promises God has given us’. This is not what hope is to most people.

In a poll last year, religious worship was the activity that parents were least likely to rate as appropriate for school assemblies. But there is a tendency in some state schools, and a growing number as a result of ‘multi-academy trusts’ (which allow churches to run non-church schools), to push Christian ‘worship’ onto what is often in a bemused or indifferent school body. This can be a wasted opportunity to present a lesson that explores new ideas or challenges children to think differently. In connection with a High Court case challenging this in one school last year, many parents said how unwelcome these sorts of assemblies made their children feel. Others were more candid, saying ‘weird’ assemblies had made school seem ‘boring’ and ‘fake’ for kids who until then had loved going to school.

If anything shows that religion is not the source of our social morality, and that the framers of the 1944 law were wrong in their narrow prescription for British school assemblies, surely it is the present situation. Yes, good religious people have sprung into action to give voluntary or professional care and service at this time. But this has not distinguished them from everybody else. Good people with non-religious beliefs have been doing the same. Indeed – one of the most stand-out features of the social response in the UK has been how one of the most non-religious populations in the world have shown themselves to be among the most selfless and giving, whether in the biggest crowdfunding in history for Colonel Tom, or the glut of impressive new secular start-ups like Covid-19 Mutual Aid. Our common humanity is truly what binds us together and we are finding, amid the pandemic, that these bonds are very strong indeed.

When schools return, most of them will once again be providing assemblies far more inclusive than those mandated by the law. Assemblies for all pupils. When our lawmakers return in full, they should realise that the time has come to bring the law into line with that good practice.