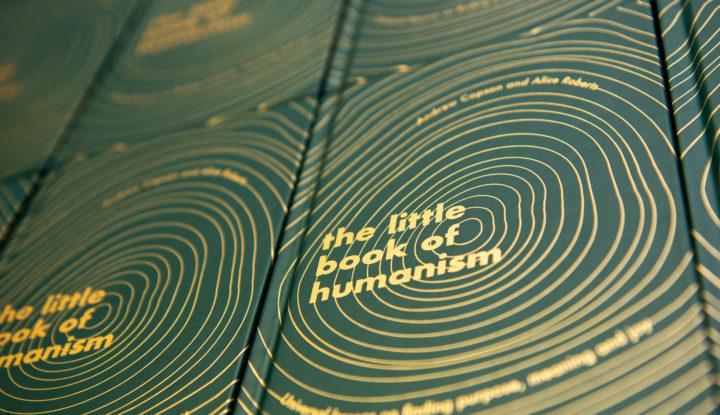 Alice Roberts and I were invited to discuss The Little Book of Humanism with New Humanist magazine.

The original interview was published on 19 October 2020.

What was the motivation for putting together this book?

There are great books out there about humanism as a philosophy, written by philosophers, but we both thought there was a need for a book that would be short and accessible and more about humanism as an active approach to life. We wanted a book that was positive – that started from the positive beliefs and values and opinions that humanists have. And we wanted one that was illustrative – not just our own words but showcasing some of the diversity of humanist thought on different subjects.

How would you define humanism?

Pretty much the same way it’s always been defined! The humanist approach to life is a nonreligious one that accepts the universe (including this planet and ourselves) as a natural phenomenon, emphasises the importance of this one life we know we have, and commits to putting the wellbeing of humans and other sentient animals at the centre of our moral decision making.

You’ve quoted from a vast range of sources, from Greek philosophers to the Disney movie Frozen. What was your criteria?

We knew the humanist ideas we wanted to illustrate – whether it was the interconnectedness of human lives, the importance of the scientific method, or the role of empathy in moral decision making. Once we’d decided that, we just had to find the very best quote from a humanist out there to illustrate each of them. We ended up using quotes from humanists from across the globe and over the last three thousand years, simply because we thought they were the best!

You quote from the UN Declaration on Human Rights. Why?

For us it is one of the ultimate statements of humanism. This isn’t just because humanists were involved in writing it, although of course many were and were some of the prime movers in the creation of human rights as a legal concept. It’s mainly because the declaration relies on values that can be shared regardless of tribe or race or creed or culture. They are based on observations of human needs that are universal and that is a very humanist idea.

What is the role of ancient wisdom in humanism? You cite Confucius and Mengzhi among others.

Some people think “ancient wisdom” is wise because it is ancient, as if people were once more in tune with the universe and themselves than we have become. That’s obviously not a humanist assumption. But there were many people and cultures with a humanist approach to life in the ancient world in Asia and Europe and we wanted to include examples for two reasons. Firstly, because they confound a popular misconception. Too many people think of the past as religious and humanism as a modern western phenomenon. It’s not true and we wanted to show that. Secondly, we included them because they were often the best way of illustrating a humanist idea. Mengzhi’s illustration of the biological foundations of morality in our natural instincts is hard to beat, even if it is 2500 years old! He said:

“All human beings have a constitution which suffers when it sees the suffering of others… If people catch sight suddenly of a child about to fall into a well, they will all experience a feeling of alarm and distress… Because we all have these feelings in ourselves, let us develop them, and the result will be like the blaze that is kindled from a small flame, or the spring in full spate that starts with a trickle. Let these feelings have a free rein, and they will be enough to give shelter and love to us all.”

And the common sense of the Charvaka school of thought, 2,600 years ago in India, is timeless:

“There is no heaven, no final liberation, no soul, no other world… How can this body, once dust or ashes, return?”

We’re facing multiple crises as a society – not least the pandemic, and the looming threat of climate change. What role does humanism have to play?

Humanists are all about confronting reality, finding solutions to problems through reason and evidence, and applying those solutions through cooperation. Together with the humanist commitment to valuing every human life, these ideas are well suited to addressing today’s national and global challenges.

We also tend to be optimistic (at least “51% optimistic” as Philip Pullman put it). A declaration of confidence at times like these, that if we think hard and try hard we can meet these challenges, doesn’t go amiss. Particularly in the case of the pandemic, if you think about the things that are really helping humanity compared with previous pandemics in our history – from the science that is finding treatments to the systems of social welfare – they are due in large part to the impact of humanist thinking over recent decades and centuries.

People often say we live in a ‘post-truth’ society. In your book, you spend some time on the idea of ‘truth’. How can we define truth, and why is it important?

Something is true if it corresponds to reality and this is indeed a very important principle for humanists. You will be a better person if you think more clearly, not just about what others are saying but about your own beliefs too. You will be more aware of reality, and the more aware of reality you are, the more of an honest and authentic life you can live. You will have a better chance of improving not just your own life, but the lives of others, your society, and our world, if you think clearly and face reality with courage.

But human beings are not always good at accepting the truth. We fool ourselves into thinking that things are right or true for all sorts of reasons. Maybe because it is fashionable to think something, or because someone has told us, or because it’s something we’ve believed for a long time. We want to believe it, even if it’s not true. That’s why we spend a bit of time on this in the book. Knowing what’s true can be hard and we all need to practice!

You also write about critical thinking. Is that a humanist principle?

Absolutely! To think critically and be sceptical is at the foundation of humanist ideas. Harold Blackham put it well when he said that for humanists:

“…there is no immemorial tradition, no revelation, no authority, no privileged knowledge (first principles, intuitions, axioms) which is beyond question and which can be used as a standard by which to interpret experience. There is only experience to be interpreted in the light of further experience, the sole source of all standards of reason and value, forever open to question. This radical assumption is itself, of course, open to question, and stands only in so far as it is upheld by experience.”

There are so many barriers to critical thinking put up today, either by people misinforming us or by our own cognitive biases and someone taking the humanist approach has to work hard to compensate for that.

What is the humanist approach to death, and to loss?

What a big question! In the book we look at the question of how to approach our own death, as well as that of others, and explore a wide range of perspectives on death. One of the most important is certainly the humanist acceptance that death is the end of our personal existence. As Bertrand Russell put it:

“The mind grows like the body; like the body, it inherits characteristics from both parents; it is affected by diseases of the body and by drugs; it is intimately connected with the brain. There is no scientific reason to suppose that after death the mind acquires an independence of the brain which it never had in life.”

As to the feeling of grief, an important humanist idea is that the feeling of grief is the price of love. Which would you rather have? Would you rather never have any love in your life, or would you rather love, even though this means you will inevitably experience loss and grief as a result? And, although the someone who has died no longer exists as themselves, for us left behind the traces of their lives persist in myriad ways, from their descendants, to the deeds they have done, and in our memories of them. We can still speak with them in our own minds and, quite often, we know exactly how they would reply to us. We carry their legacy forward in the human story, just as the people coming after us will do when we are gone.

A thought experiment from A C Grayling, which we quote in the book, makes a very humanist point about how we should approach our own grief:

“Think of those you care about, imagine them mourning when you die, and ask yourself, how much sorrow you would wish them to bear. The answer would surely be: neither too much, nor for too long. You would wish them to come to terms with loss, and thereafter to remember the best of the past with joy, and you would wish them to continue life hopefully, which is the natural sentiment of the human condition. If that is what we wish for those we will leave behind us when we die, then that is what we must believe would be desired by those who have already died. In that way we do justice to a conception of what their best and kindest wishes for us would be, and thereby, begin to restore the balance that is upset by this most poignant of life’s sorrows.”