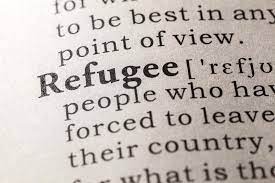 To mark the 70th anniversary of the UN Refugee Convention – which the UK helped launch and ratify in 1951 – I made a contribution to the new ‘Refugee Dictionary‘, unveiled on 28 July 2021.

The dictionary contains over 1,000 personal definitions submitted by members of the public, including faith or belief leaders, local communities, high profile figures, and refugees themselves. Its purpose is to demonstrate a strong sense of solidarity and help illustrate the stories, lives, and contributions of refugees in the UK. It was created by the UN Refugee Agency’s UK charity partner, UK for UNHCR.

For the last 70 years, the UN Refugee Convention has helped to protect the millions of vulnerable people forced to flee their homes. The Convention defined who a refugee is in law and set out the human rights of women, men, and children fleeing the horrors of war and persecution to seek safety in another country. Countries that have signed up to the Convention agree to protect refugees, but also to provide them with a series of rights including the right to work, to education and to a home, making a huge difference and allowing individuals and families to build a future.

Here is my contribution:

‘A refugee is… a person who stood up and stood by their beliefs even in the face of fear or persecution.’