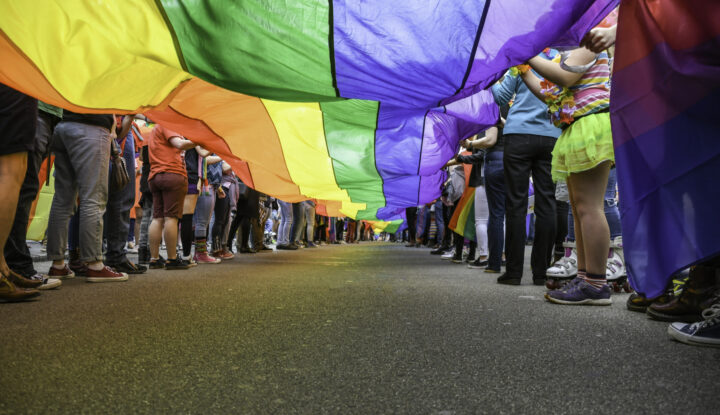 In celebration of LGBT History Month in February, I gave a talk on the history of humanist LGBT activism to members of Humanists Australia . Here is an abridged transcript of that talk.

Humanist organisations – for almost as long as they’ve existed, which is about 130-140 years now, and everywhere in the world that they exist, which is in about 100 countries now – have had equality as part of their agenda.

There’s two things that propel humanists in the direction of equality, both generally and specifically for LGBT people. The first is obviously that a humanist approach to life is one that is explicitly, completely, and solely informed by a scientific view of how the external world is. When we try to understand the universe, when we try to understand the behaviour of things – and that includes the behaviour of human beings as part of the material universe – we look to reason, evidence, and the great organised enterprise of science to make sense of this. That tells us straight away that there is nothing unnatural or perverse about sexual orientations towards people of the same sex. There is hardly a species of animal in which we can’t observe same-sex pair bonding. Secondly and similarly, the origin of gender identity issues can also be observed in nature; that, too, is an objective reality that we can see. Human beings are related to every other animal through the process of evolution that has produced us and every other living thing. So, contrary to what some people have thought in the past, there’s nothing strange or abnormal, in the pejorative sense of the word, about same-sex orientations or gender identity variations.

So it’s a no-brainer that humanists are going to be supportive of the human rights and equality of LGBT people, just as they are of anyone for whom the fulfillment of their rights is inhibited by tradition, or religion, or state authority. And indeed, that’s what we’ve seen ever since humanist organisations got going.

In the UK, humanist organisations have always been associated strongly with the idea of human freedoms and freedom of choice. Many of the early humanists who were associated with the drive towards the human rights and equality of gay people were also utopian socialists. You might think of people like Edward Carpenter. These people were in some ways very attracted to eastern philosophies, as lots of 19th century humanists were. They often idealised the religions and beliefs of places like India and China; they saw these as almost humanistic religions because they made great allowances for human diversity and diversity of thought. In their eyes, they weren’t the oppressive religious institutions that had dominated European history. They were freer – and there’s a lot of Orientalism in that attitude that probably doesn’t bear too much analysis.

But they were humanist by our definition, even someone as esoteric as Edward Carpenter. If you’re not familiar with his life, then there are two very good biographies about him. He opted out of society, he settled in the countryside, and he lived, as a very middle class man, with a very working class partner who was much younger. He wrote a book called The Intermediate Sex, which was about sexual orientation as we would describe it. He chose to, as it were, ‘come out’ of society, and live with someone who, even if that person had been of the opposite sex, would still have been an inappropriate match for him in the eyes of Victorian society because of the difference in class, and background, and circumstances. His attitude reflected those who pursued a humanist lifestyle in the 19th century: people for whom their ideal of equality of different sexual orientations went hand in hand with this wider ideal of social solidarity.

Edward Carpenter believed in the love between men as being a leveler of social inequality and something that would drive a broader equality in this world. He and the many people around him, like the founders of the Humanitarian League – which is another humanist organisation in the UK at the time – shared this attitude. In the late 19th century, you get this interest from humanists about LGBT equality, on the grounds of personal development, individual fulfillment, or commitment to the idea that love is a force that can change society as well as transform individual lives.

The same approach was taken by one of the most famous 19th and early 20th century gay humanists: E.M. Forster, Vice President of Humanists UK and a great humanist activist. He wrote many essays and made many broadcasts, in addition to his obviously more famous novels around the human condition that put a humanist tilt on these things. The world he was writing about was that of Edward Carpenter, a world where you could maintain the equality of people of different sexual orientations in the context of a wider equality for human beings. So again we see an idealist, someone prompted by his own sexual orientation towards a bigger concept of freedom and equality. This was the flavour of LGBT advocacy within the humanist movement at the time.

In the middle of the 20th century, there was a decided shift. Humanist organisations became less about idealism (in terms of the development of ethics, ethical communities, and a personal code) and became much more political. This is true across the humanist movement in the UK, Europe, and the world at the time. It’s true in terms of the campaigns that Humanist organisations started launching for freedom of speech, for race equality, and for all sorts of legislative alterations in outmoded Victorian laws. So it is that we move into the political phase of Humanists UK and of humanists campaigning on LGBT equality. The decriminalisation campaign in the UK that was finally successful in the 1960s, became a cause célèbre for the humanist movement.

Leo Abse, the Welsh Labour MP who was famous for bringing private member’s bills for the decriminalisation of male homosexuality and for the liberalisation of divorce laws (another humanist cause at the time), was a key member of the Parliamentary Humanist Group. The involvement of humanists in the decriminalisation campaign is only now becoming clear, as historians begin to analyse the networks that existed. Callum Brown, a Scottish historian at the University of Glasgow, has written a book very recently about humanism in the mid-20th century, and just how many of the progressive reforms of that time were the product of humanist organisations or networks.

We also at this time see far more women emerging as gay in British society, coming out, feeling a moral impulse to do so in order to to improve the lives of others and also to live more authentically themselves. But now the message is no longer just about personal development, personal fulfillment, and wider human solidarity. It’s more edgy, it’s more political. Maureen Duffy, who was the first gay woman in British public life to be open about her sexuality when she came out in the early 1960s, is still with us and a patron of Humanists UK. I think she’s in her late 80s now, but is still very active, comes to all events, and is very vocal. She said that there was a moral imperative on people to ‘come out’, not just for personal development, but to assist others and make a political statement. That’s the sort of area that we see in mid-20th century humanism.

Decriminalisation was very successful, but it wasn’t just gay humanists who were in favour of decriminalisation. A.J Ayer was a very famous academic philosopher and later President of Humanists UK, and he chaired the committee for the decriminalisation of homosexuality. Straight humanists were really the earliest allies of gay people. A J Ayer (notorious for his many affairs)  joked he was an effective advocate precisely because people couldn’t accuse him of a vested interest…

In the mid-20th century story about gay humanists, and humanists campaigning for gay equality,  you may have noticed that we don’t yet have any gay humanist organisations. In fact, a UK gay Humanist organisation was started back in 1979, after Mary Whitehouse, a campaigner for what she called morality, gave a speech in which she said that there was a gay humanist conspiracy to pervert society and to wash away Christian norms, and so on. A few gay humanists thought that a gay humanist conspiracy sounded like a very good idea, so they set up the Gay Humanist Group, which is today’s LGBT Humanists UK. And that really gave a formal aspect to gay Humanist campaigning, which did and still does incredibly important work in the UK.

Today, we remain ahead of the curve, out in front on an enormous range of issues. Most political parties in the UK now agree that LGBT conversion therapy should be banned – but it was organisations like LGBT Humanists that first raised the issue forty years ago. They were also the first organisation in the UK to adopt the International Day Against Homophobia, something that is now marked by the UK Government and  is widespread across the world. Humanist celebrants have been doing same sex weddings for decades, and LGBT Humanists was one of the first organisations to push for marriage equality. And on gender reassignment, humanists were out in front, promoting these issues even before a lot of other LGB advocacy groups came on board. So there’s a great history and a continuing role for humanist groups to continue their advocacy for LGBT rights by being leaders of social change – underpinned by the ethical principle that human freedom should only ever be limited by the rights and freedoms of others.

There’s not a humanist organisation in the world, from Uganda to the Philippines, where humanists aren’t active in the cause of LGBT rights, women’s rights, and the rights of children, and democratic activism. A humanist approach to life is both personal and political; humanists say something about the world, and how it should be.

Humanists often feel a solidarity with people who are similarly excluded – humanists in the 19th century were very involved in anti-slavery campaigning and racial equality. And that empathy is still a motivation today for humanists and LGBT people in many countries. There is an almost complete overlap between the countries where homosexuality is criminalised and punished, and countries where the non-religious are similarly criminalised and punished. The more religious a state is, the more persecuted, alienated, disadvantaged and oppressed are LGBT people in those societies. So there remains a strong affinity between humanist organisations and the cause of human rights and equality for LGBT people.

I’m sure that as humanist activism increases in Australia, you’ll all be joining in that cause internationally and we look forward to welcoming you.