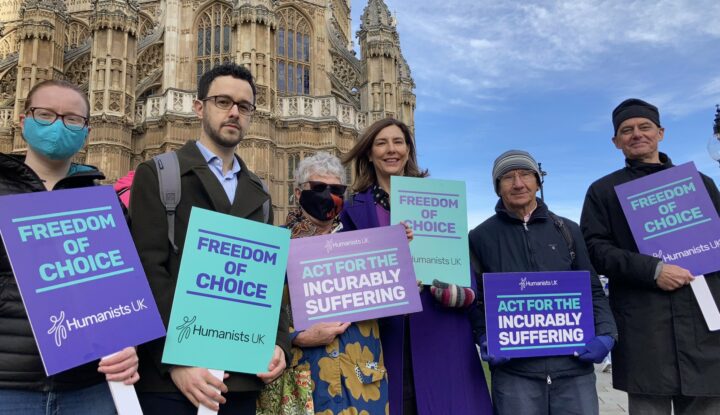 Today the UK Parliament debates Baroness Meacher’s Assisted Dying Bill in the House of Lords, a bill that proposes to legalise assisted dying for adults who have six or fewer months left to live. Humanists UK, which campaigns for the right to die for those with terminal or incurable illnesses, fully supports the Assisted Dying Bill as a landmark step towards much-needed reform. Today it took part in a rally outside Parliament at which I spoke. Here’s what I said:

Freedom of choice is at the heart of our campaigns, and that is why we support assisted dying for those who are terminally ill and incurably suffering.

Thank you all for being here today.

Thank you for showing your support for freedom of choice.

Thank you for standing up for the countless families criminalised for acts of love.

Thank you for saying that the disgrace of a law which obliges you to suffer must end.

But most important of all, thank you for reminding those behind us – those who actually have the power to change this outdated and cruel law on assisted dying – that is the moment for them to turn their sympathies into action. Because now is the time to legalise assisted dying.

While the current Assisted Dying Bill before Parliament today only focuses on the terminally ill and though I and many others think it should go further to meet the needs of the incurably suffering as well as the terminally ill, it represents an immensely powerful opportunity for change.

I’ve heard a lot of people say that if we change the law on assisted dying, then we’ll risk changing our culture and relationship with death as well.

And you know what – they’re right.

It’s true that if we allow people to choose the manner and moment of their own death – then we’ll change a culture where those who are the luckiest are forced to travel abroad, as though they are some embarrassment, to die in a country which is not their own.

It’s true that if we enshrined the values of dignity and compassion in our law – we’d change a culture in which 300 terminally ill people are driven to ending their lives every year.

It’s true that if we gave people the security of knowing they had a way out if their suffering ever became too much to bear – then we’d create a culture which fortified the terminally ill and incurably suffering with the confidence to go on living.

It’s all true and I for one want to forge that better society. To develop a culture that prizes freedom and choice, which shows empathy to those in unbearable anguish, and which guarantees dignity for everyone irrespective of their financial means.

And that vision for how society could be is now within our grasp. We know the public is standing with us today and we call on parliamentarians to do the same.

Let me finish by reminding you why we are here today. Why we are the champions of compassion and freedom in this debate. And why, in the end, we will see that change that so many people in our country so desperately need.

Many of you might recall earlier this year when two of Humanists UK’s closest friends: Paul Lamb and Noel Conway died. Both men had been stalwarts of this movement and made huge strides towards the legalisation of assisted dying.

But it is something that Noel Conway said which still sticks in my mind. When he ended his life he said:

Let this be our rally charge to Parliament today.

Never again should someone like Noel be denied the basic freedom to choose how they die.

Never again should they be refused the dignity of a peaceful death.

And never again should the law of this land be allowed to prohibit legal, safe, and compassion assisted dying.

It may now be too late for Noel, but for countless others we can put an end to it right here, right now, today.