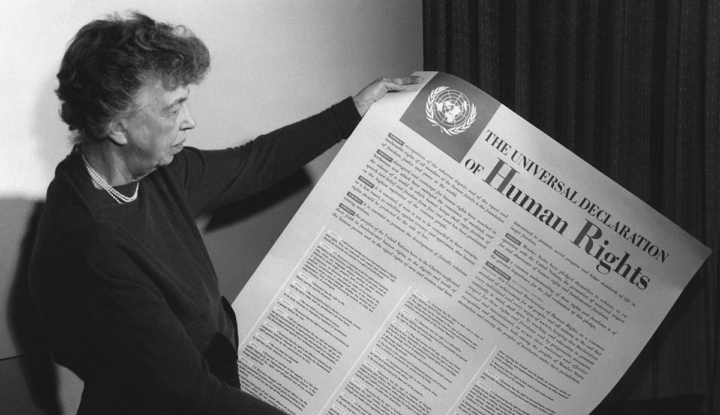 Human Rights Day offers the opportunity to reflect on what an enormous human achievement ‘human rights’ are and on the commitments they entail, from the empathy which underpins them, to the rule of law which guarantees them – values we need to live out today and every day.

73 years ago today men and women from every country and every culture, every religion and worldview, came together to agree that some values were shared and should forever be protected as rights for all. They created The Universal Declaration of Human Rights, inspiring in sentiment but even more inspiring when you contemplate the international good will that produced it and the many human traditions that it blends. It’s this declaration that Human Rights Day celebrates.

As a human rights charity, Humanists UK is firmly committed to the protection and promotion of human rights in its campaigns for a fairer society, domestically and internationally. These rights represent shared values rooted in our common humanity and our shared human needs, transcending particular cultural and religious traditions. This regard for the equal dignity of all human beings is central to our work.

Humanist principles of justice and of valuing the dignity of each individual also lead us to support equality and oppose unwarranted discrimination. Humanists have been deeply involved in campaigning against discrimination – including discrimination against LGBT people, sexism and misogyny, and racism – for decades. We also support the strengthening of the human rights of children, in particular their right to freedom of religion or belief, and to form their own beliefs free from coercion or control in step with their growing maturity. Humanists have been in the forefront of developing modern ideas of human rights, and have been prominent human rights defenders.

Humanists condemn racism and racial discrimination in all its forms and are committed to campaigning for racial equality across all aspects of society. We have a positive track record throughout our existence in the fight for racial equality, from organising the first global universal race congress in 1911, to campaigning against colonialism in the early twentieth century, and for laws against racial discrimination from the mid-century. This commitment has continued through to today.

Humanists believe in equality based on sex and gender and so support the feminist principle of the inherent equality of women. We are a member of the End Violence Against Women Coalition, and a founding member of the ACTION: FGM coalition, which is dedicated to eradicating the practice in the UK by 2030.

For many years before 1967 we campaigned for decriminalisation of homosexuality. For over 40 years, LGBT Humanists has called for equality for LGBT people. LGBT Humanists was founded in 1979 in response to the Gay News blasphemy trial, and we’ve blazed a trail since then arguing for equality by challenging religious opposition to LGBT rights. From equalising the age of consent and campaigning for same-sex marriage, to our more recent campaign (of nearly thirty years!) to ban the horrific practice of ‘conversion therapy’, we have been resolute in calling for equal rights.

And these rights still need defending and advancing. In the UK, people continue to be unfairly privileged or discriminated against because of their religion or belief in education, compulsory collective worship, employment, marriage law, and elsewhere. Internationally, people are persecuted for blasphemy and apostasy with extreme punishments like the death penalty being in force. These examples demonstrate that despite the progress we have made so far, we still have a long way to go in bringing about human rights for all.