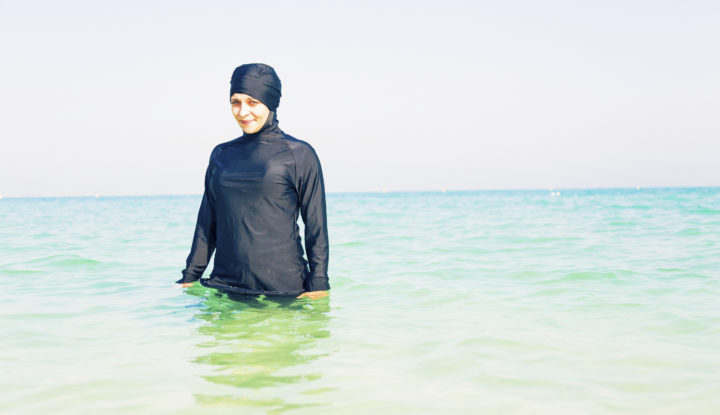 Today judges in France will rule on the legality of the burkini ban which has been enforced across 26 towns on the grounds that the full body covering on the beach is not “an outfit respecting good morals and secularism”. As someone who works full-time to promote political secularism (in France, “laïcité”) in the UK and internationally, as chief executive of the British Humanist Associtaiton, to see what is now happening in France defended in these terms is deeply troubling. Secularism? Not my secularism.

It is not the secularism of many French people either. The great French scholar of secularism Jean Baubérot has always spoken of secularism as having three parts: everybody has freedom of conscience and thought and is free to change; their beliefs and manifest their beliefs within the limits of public order; there is no state discrimination against people on the grounds of their religion or non-religious worldview and everyone receives equal treatment on these grounds; religious institutions are separate from the institutions of the state and there is no domination of the political sphere by religious institutions.

Clearly, the forcing of women out of their chosen clothes in public is not compatible with the freedom of choice that secularism is meant to protect. So why is it happening? It is happening because the present debate is not really about secularism at all. It is about Muslims and about electoral politics.

The man who epitomises this truth is Nicolas Sarkozy. Criticising the burkini, he claimed in one television interview that “we don’t imprison women behind fabric” and has been vaunted as a defender of laïcité. Rewind to 2008 and he was openly challenging the values of secularism during a fawning visit by the Pope saying that “a person who believes is a person who hopes, and it’s in the interests of the Republic that there be many women and men who nourish hope.” Earlier in that same year he addressed Saudi Arabia’s Shura Council (a council of 150 government-appointed advisors to the king), in a speech widely criticised by French secularists. Sarkozy is a Catholic, using secularism as a pretext to demonise Muslims and win over far-right voters in his bid to be president of the Republic. Let’s not confuse political point-scoring with a strong commitment to laïcité.

There are at least two broad churches when it comes to philosophical conceptions of secularism. The first is the one the British Humanist Association endorses: a secular state is one that is connected with neither religion nor belief (which entails a strict separation between religion and state institutions), and policy should not be decided on the basis of either. Everyone is free to believe whatever they wish, and discrimination, both direct and indirect, on the basis of religion or belief (as well as other characteristics) ought not to be permitted by law.

Additionally, not only should people be permitted to believe what they wish, but manifestations of such belief should be entirely legally acceptable, with very few exceptions. For instance, it is permissible to ban the of covering one’s face in court, as it is justified on perfectly reasonable grounds, namely that seeing a person’s facial expression is crucial to the ability of the jury, magistrates, and any other relevant persons to determine (as far as is possible) whether or not the person being questioned is being honest when giving their testimony.

However, it isn’t just about non-discrimination, it is about inclusivity in national ceremonies such as Remembrance Day, and including the study of non-religious worldviews in schools. In other words, it is about equal respect, human rights, and a safe public space where all have the right to participate.

The implications of this ban are clear – choose between what one sincerely believes is required by one’s religious beliefs, being excluded from public spaces or face being forced to remove your clothing in public, or risk a fine. Importantly, this disproportionately affects Muslim women compared to non-Muslims and men. Therefore, the ban is incongruous with at least one of the arguments used in support of banning the burqa and burkini, namely that such garments make women “less free”, and are “misogynistic” and used as a means of control by men of Muslim women.

Those in favour of the ban clearly fail to see the overt hypocrisy contained in these laws: “we must force you to dress a certain way in order to prevent you being forced to dress a certain way”, which is frankly, absurd. And while we may find the recent religiously motivated attacks perpetrated in France appalling, and feel a deep sense of sorrow and solidarity with the French people, the sensible response to the fear, anger, or even hatred of Islam in the wake of such attacks is not to demonise and punish innocent Muslims.

Women should be free to wear bikinis in Iran and Saudi Arabia and burkinis in Europe. Saudi Arabia and Iran don’t even pretend to be free countries but France especially  – where the modern idea of secularism was forged – has a duty to be exemplary in its approach. Today the Court has an opportunity to reclaim that status for the Republic.

This article originally appeared in the Independent: http://www.independent.co.uk/voices/secularism-banning-burkini-muslim-women-france-makes-no-sense-a7211226.html